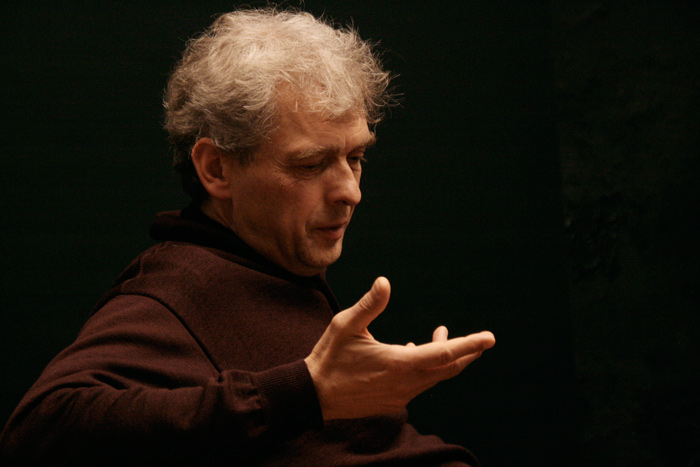 Konrad von Abel gained his first musical training with the Stuttgart Hymnus-Chorknaben. At the age of 17 he met Sergiu Celibidache, whose manner of making music exerted considerable influence. Von Abel then studied Piano and Music Theory at the Musikhochschule in Stuttgart, graduating in 1983. During this time he was a member of the Conducting and Musical Phenomenology master class held by Sergiu Celibidache. Between 1986-1989 he studied Philosophy and Musicology at the University of Munich.

During his time as Artistic Assistant to Sergiu Celibidache with the Munich Philharmonic between 1986-1996 he assumed responsibility for Celibidache’s conducting class and became increasingly involved with numerous international conducting activities. He conducted the Sinfonica Siciliana di Palermo, the Munich Philharmonic, the Bern Symphony Orchestra, the Orchestra Sinfonica di Bari, the Orchestra Alessandro Scarlatti di Napoli, the Orchestre Régional de Picardie, the Cyprus Symphony Orchestra, as well as other orchestras in Germany, Italy, Switzerland, Finland, the Czech Republic, Romania, Venezuela, the Philippines and Japan.

From 2004 to 2006 he was artistic director of the Conservatoire National de Bordeaux symphony orchestra.

The > MonteverdiChor München was founded by Konrad von Abel and he remains today its chief conductor. Concerts have been given throughout Europe with this highly qualified a cappella ensemble.

In order to create the working conditions that are required for his understanding of music Konrad von Abel formed the Académie Internationale de Musique/Association Musique & Phénoménologie (former name Associacion Celibidache) in France. With the Orchestre des Régions Européennes – founded in 1999 – he performed in France, Mexico and Germany to great critical acclaim.

His energies are partly directed at seminars devoted to musical phenomenology and chamber music in Paris and Madrid as well as to conducting workshops in Munich, Barcelona and Bucharest. His master classes for conducting orchestra and choir in France, Germany, the Czech Republic and Romania can count among their membership participants from around the world.

There is a long term documentary in process about Konrad von Abel’s conducting and unique approach to music – realized by Musikproduktion Hoeflich and the German camera woman > Gisela Tuchtenhagen.